Trapping alone will not keep the Indian mynas under control. Mynas thrive where there is easy access to food. You can reduce their available food source in the following ways:

Mynas nest in tree hollows, roofs, exotic trees and the dead fronds of palms. To break the cycle:

Planting a wide range of local native plant species in your garden will provide a diversity of habitats for native birds.

Indian mynas prefer foraging in area with a clear understorey. Gardens with a reduced lawn area containing a mixture of native trees, shrubs and herbs, especially with a dense understorey, will attract a variety of birdlife without providing suitable habitats for Mynas.

YIMAG coordinates the manufacture and sale of the Pee Gee Myna Trap. 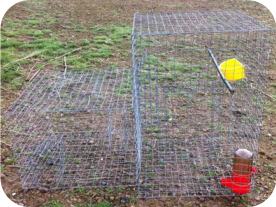 Do not approach the trap in daylight hours. Check the trap daily.

Remove trapped Indian mynas after dusk and reset the trap ready for the next day.

Location is important – so if you are not successful in catching Indian mynas in one location, it might be worth trying a different one.

The trap can be baited with any food the Indian mynas are accustomed to feeding on.

For ongoing trapping, dried cat food is recommended as it is simple to use, the right size, and has plenty of red bits (e.g. Friskies or Whiskas dry cat food), which the Indian Mynas are attracted to first.

Chook food and grain is not recommended as this will attract native birds (e.g. crested pigeons and parrots).

Place clean fresh water and cat food in the trapping chamber – the idea being the trapped birds will be happy and will call other birds to the area (to be trapped!).

It is recommended that food is placed on a white plate.  Other coloured plates are acceptable but it has been suggested white plates may help the birds to see the food.

For the first few days put a small amount of loose feed outside the funnel entrances to attract mynas to the trap area.  Also place food in the tunnel, and inside the feeding chamber where the mynas can see the food directly in front of them when they are in the tunnel.

Do not overfeed the birds outside the trap.

Do not attend to the trap in daylight if possible.  Removing birds, or baiting the trap should be done after dusk or at night so the birds don’t associate the trap with danger.

It is recommended that the trap is baited ready for trapping first thing in the morning as birds start searching for food on the crack of dawn.

If crows and/or magpies are attracted to the site, funnels can be placed over the entrance to the trapping chamber to prevent them taking any free food in the walk-ins or in the feeding chamber.  They are too big to fit through the walk-ins and get into the trap.

If foxes or other animals attend to the trap, it may need to be secured with pegs. Placing bricks in the holding cage may also prevent other animals over turning the trap and removing the bait.

Keep pets (particularly cats and dogs) away from the trap and trap area.

Do not be disappointed if you don’t catch birds every day. They are spasmodic in their movements, so be persistent.  If you keep feeding they will return.

It can be useful to keep a call bird in the containment chamber of your trap, or in a bird cage placed near the trap, as this may encourage others to the trap.  Avoid stressing the trapped bird(s).

Check the trap regularly.  Non target species are caught from time to time, and can be allowed to escape by opening the door of the trapping chamber.  Do not throw birds in the air – let them find their own way out.