In Australia, the Indian or Common myna thrives in habitats created by humans, such as urban, industrial and agricultural areas and areas of open woodland.

Indian mynas are native to the Indian sub-continent (Iran-Sri Lanka). They were brought to Melbourne market gardens in the 1860’s to control the insect population. They were then taken to Cairns and other places in the far north Queensland to control insects in the cane fields. They failed to control insect pests!

Why are Mynas a problem?

Mynas have become a huge problem in cities and urban areas where they have been able to effectively adapt to a range of conditions and exploit a wide variety of food types.

Mynas are extremely aggressive, competing with native wildlife for scarce resources. They evict animals and birds from their nests, attack chicks of other species and breed in tree hollows rendering them un-useable by other wildlife. This is of particular concern, as approximately 15% of our land-dwelling vertebrate species depend on tree hollows for shelter or breeding throughout some stage of their life.

Indian mynas form communal roosts which can consist of hundreds of birds. The noise and fouling around nesting and roost sites can be considerable and in public places such as schools and shopping centres, also pose a health risk.

Myna nests can block rain water drains on roofs and gutters, often causing internal water damage and blockage to buildings. The Indian myna can also infest your roof and insulation with mites.

Mynas are carriers of bird mite which can cause severe itching and dermatitis. They also carry other avian diseases such as psittacosis and salmonellosis which can potentially impact on human health.

Indian mynas are an introduced species and are not protected in Victoria or any other state in Australia. As they are feral birds, no permission is required to trap or dispose of them. However obligations exist through relevant animal welfare legislation to treat and dispose of the birds humanely. In Victoria, Indian mynas are not listed as a pest species under the Catchment and Land Protection Act 1994 and so there is no legislative requirement to control them.

The Indian myna is very similar in appearance to the native Noisy Miner, and they are often confused.

Both the Indian myna and Noisy miner have yellow beaks and a yellow patch around their eyes.

Indian Mynas are predominantly chocolate brown with a black head.

Noisy Miners are native birds that are predominantly grey. They are protected and must be released if trapped.

Behaviours and Habits of the Indian Myna

The Indian Myna’s behaviour is seasonal. As they start their breeding cycle earlier than native birds forming breeding pairs from September to March and can raise multiple clutches per year, with 4-5 chicks per clutch.

When the juveniles are ready to fly they join larger groups and move to communal roosts where they can number in the hundreds.

They split up in the mornings, travelling in small family groups to look for food and often visit regular feeding sites. Mynas are well adapted to urban areas where feeding sites are plentiful.

They are often seen resting on power lines and prowling shops and schools. They nest in the gaps in city buildings and petrol stations, air conditioners, and in house roofs and gutters. They take over nest boxes and displace native birds and animals. They invade back yard gardens, feeding from grevilleas and seed put out to attract native birds. They particularly like left-over pet food. 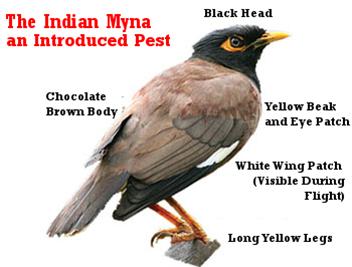 Noisy Miners are native birds that are predominantly grey. They are protected and must be released if trapped.